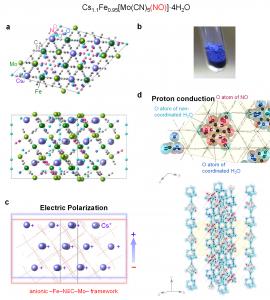 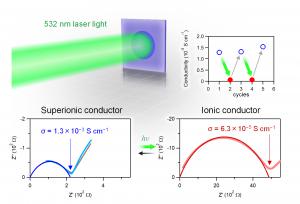 Ionic conductivity (σ) switches by irradiating 532 nm laser light, and returns to the original value with time. This photoswitching effect is repeatedly observed.

TOKYO, JAPAN, October 15, 2020 /EINPresswire.com/ — Ionic conductors are used in various applications such as fuel cells, lithium-ion batteries, and chemical sensors. Ionic conducting materials with conductivities above 10−4 S/cm are called super-ionic conductors. In the present work, we developed a super-ionic conductive polar crystal that exhibits a photoswitching effect. The composition of this blue-colored crystal is Cs1.1Fe0.95[Mo(CN)5(NO)]·4H2O. This material consists of a three-dimensional iron-molybdenum cyanido-bridged framework containing cesium cations (Fig. 1a, b). Structural analysis indicates that the compound has spontaneous electric polarization due to the difference between the center of the positively charged cesium ion and the negatively charged iron-molybdenum cyanido-bridged framework (Fig. 1c). Furthermore, a one-dimensional hydrogen bond network is formed by the oxygen atom of the nitrosyl group (–N≡O) and the water molecules in the structure (Fig. 1d).

Furthermore, we investigated the photoswitching property because this compound has a nitrosyl group which is expected to show photoresponsivity. Upon irradiation of 532-nm light to the sample inside a humidity-controlled container, the ionic conductivity changed from 1.3×10−3 to 6.3×10−5 S/cm (Fig. 2). After stopping the irradiation, the ionic conductivity value recovered to the original value over time. Observation of such a photoswitching phenomenon on a superionic conductor is the first example in the world. This photoswitching effect originates from the reversible change of the Mo–N≡O bond angle by photo-irradiation due to the photo-isomerization of the NO ligand. The change in the bond angle causes a breaking of the hydrogen bond between the NO ligand and the H2O molecule, resulting in a decrease of the proton conductivity.

By taking advantage of the photoswitchable ionic conductivity of this material, turning on and off the batteries by light irradiation may become possible in the future.