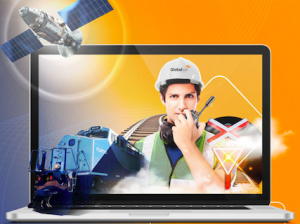 The solution enables accurate real-time tracking of each train and reliable voice and data communication between drivers, maintenance teams and Control Center.

The new solution makes cargo transportation by rail more efficient and safer increasing the productivity of the system that connects the largest grain production center in Brazil to the Port of Santos”
— Darlan Fábio De David, Vice President of Operation Norte at Rumo

• Reliability: operates on Inmarsat’s global satellite broadband network
(BGAN), which is highly reliable and allows secure communications with 99.9% uptime.
• Real-time voice communication and visibility: provides real-time telemetry data from locomotives to provide visibility, wherever they are located, and the ability to speak via push-to- talk radio (PTT) anywhere.
• Safety: improves operational efficiency and safety by connecting locomotives and operators anywhere.
• Fully integratable: simple to install and integrate with existing radio and telemetry systems.
• Enhanced support: 24/7 support whenever you need it.

ABOUT THE COMPANY
Rumo is the largest railway operator in Brazil and offers logistical services for rail transportation, port elevation and storage. The company operates 12 transshipment terminals, 6 port terminals and manages approximately 14 thousand kilometers of railways in the states of Paraná, Santa Catarina, Rio Grande do Sul, São Paulo, Mato Grosso do Sul, Mato Grosso, Minas Gerais, Goiás and Tocantins. Their asset base is formed by more than a thousand locomotives and 28 thousand wagons.

THE CHALLENGE
In Brazil, the railway system is essential for the transport of agricultural, industrial and container cargo to serve the export, import and domestic markets. Responsible for connecting the largest production centers to the main ports in the country, Rumo transported 58 million tons in 2019. Much of this volume was transported through the main rail corridor in Brazilian agribusiness, which connects the state of Mato Grosso to the Port of Santos, largest port complex in Latin America.
As most of its railways pass through remote regions of Brazil, one of the main challenges that Rumo has been looking for for several years is efficient network coverage. Connectivity difficulties in certain locations prevented drivers, railway engineers and control centers from communicating in real time, as messages sent could take more than ten minutes to be delivered. Since trains could not continue their journey until they received updates from control centers, operations were subject to delays and fuel costs with unnecessary braking and starting.

THE SOLUTION
In response to Rumo’s challenges Globalsat do Brasil, Inmarsat and Cobham SATCOM joined forces to offer a tailored communication and telemetry solution for rail networks. The solution enables the accurate real-time tracking of each train on the Rumo network, as well as reliable voice and data communication between drivers, maintenance teams and the Operations Control Center (CCO).
Beginning in early 2020, by the end of 2021 the project will equip 300 of Rumos locomotives with EXPLORER 325 (BGAN) terminals, EXPLORER Mobile Gateways and Cobham’s PRISM PTT + service. Cobhams Private Routing Intelligent System Management (PRISM) technology provides seamless and continuous connectivity by selecting the best available network (cellular/satellite/LAN) for voice and data communications with no user intervention. It also enables interoperability between DMR, LMR, and MCPTT systems ensuring the solution is fully compatible with existing technology on-board the locomotives.
Satellite connectivity is provided by Inmarsat’s Broadband Global Area Network (BGAN) service, which works through Inmarsat’s solely owned and operated, global L-band network. BGAN is trusted by governments, armed forces and companies trust to stay connected when everything else fails and exhibits a 99.9% uptime. The solution was implemented by the service provider Globalsat do Brasil, who will also offer ongoing warranty, support and repairs on site, to ensure the optimal operation of the connectivity solution.
The solution ensures that Rumo has access to uninterrupted, high-quality connectivity to facilitate the transfer of telematics, voice and video data, allowing accurate real-time tracking of each train and communication between drivers, maintenance staff and regional control centres. The locomotive data is visualized in an application at the CCO, which depicts the entire railway network and the position of each vehicle, as well as its speed.
Initially the project will focus on covering all points of “Operation North”, an initiative connecting Mato Grosso to the Port of Santos. Ultimately, the structure’s intention is to provide the rest of the fleet with highly reliable BGAN connectivity, ensuring an efficient, cost-effective and secure rail network.

THE RESULT
Although the project is in its initial stages, the partnership between Inmarsat, Globalsat do Brasil and Cobham SATCOM has produced immediate results. Before implementing the solution, messages between drivers and control centers took an average of ten minutes to be delivered. After the implementation of the satellite-enabled solution, the team now has access to real- time communications, between the driver and the CCO. This speed of communication and reliability has brought Rumo greater visibility of its assets and infrastructure, which has resulted in significant improvements in operational efficiency.

Darlan Fábio De David, Vice President of Operation Norte at Rumo, explains: “the connectivity offered by the new solution makes cargo transportation by rail more efficient and safer. With the locomotives properly equipped, we will have a flow of information in real time, facilitating communication with all links in the operation and increasing the productivity of the logistics system that connects the largest grain production center in Brazil to the Port of Santos.”

Roberto Rubio Potzmann, Chief Technology Officer at Rumo, comments on the success of the partnership: “Working with Inmarsat, Globalsat do Brasil and Cobham SATCOM has transformed the way we operate. The solution gave us the transparency to improve transit time performance, increase safety and ensure real-time monitoring of locomotive movement. In addition, the reliable push-to-talk (PTT) radio is very useful in situations where the driver needs to communicate and would not be able to do so otherwise due to lack of voice coverage.”

Igor Falcão, Senior Vice President of Sales at Globalsat Brasil, comments: “We still expect many benefits in the long run. The expectation of Globalsat do Brasil with the project is to significantly reduce costs across the rail network, with an estimated savings of millions per month as a result of optimizing the operation and taking care to avoid unnecessary braking and acceleration. Additional savings are also likely because Rumo expects to transport more goods in less time without having to invest in new locomotives and wagons.”